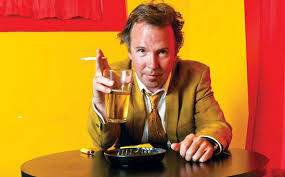 I'm Doug Stanhope, and that's why I drink.
Jesus died for your sins. I'm doing it for your mere entertainment dollar.
—"Live For Your Sins", from No Refunds.
Advertisement:

Stanhope started a fundraiser for a woman and her family after her home was destroyed by the 2013 Moore tornado on May 20, 2013. The survivor of the tornado, Rebecca Vitsmun, gained international attention by the viral media, as well as criticism by Christians, after declaring herself an atheist on live national television. Stanhope, along with Penn Jillette, Ricky Gervais, and others contributed and raised $125,760 for the woman and her family. Stanhope stated, "If you think it didn't take balls, you've never been to Oklahoma. Saying 'I'm an atheist' in Oklahoma is like screaming jihad at airport security. That took some nuts. I didn't do it because I felt sympathy because she got all her shit destroyed by a tornado. I did it simply to be a prick to her Okie Christian neighbors, hoping they were all eating off their FEMA trucks when someone drove up and presented Rebecca with a giant cardboard check..." "Charity feels good, even when you're doing it as a big 'Fuck You' to Christians who you've pre-judged, and not because you care about someone losing their shit. Realizing you've actually changed an individual's life. It was pretty goddamned thrilling."