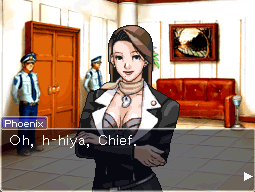 Good thing "Chief" is sufficiently sexy, or that outfit might not be permitted.
"I did half a year of French at high school. I don't think I absorbed much beyond 'Je m'appelle David.' You'd think I would have paid more attention to the luscious young Miss P. who was our teacher.
Or maybe that was my problem."
— David Morgan-Mar, Irregular Webcomic! annotations
Advertisement:

The Sexy Mentor is when a main character has an intelligent, understanding and informative boss who's a bit older than they are and undeniably attractive. At some point, it's quite possible that they might become an Official Couple. Otherwise it's just wishful Shipping on the viewer's part. Usually there's at least some flirtation or UST. In any case, the viewers often end up whistling, "Man, I wish that were my boss!"

Of course, in Real Life, this kind of behavior is ripe for sexual harassment claims. As a result, this trope contains most of the same Unfortunate Implications as Teacher/Student Romance, since the sexual harassment angle is rarely seriously explored, except as the pursuit of some devious villain.

Usually the Sexy Mentor is a woman; this is probably a combination of two factors. Women have been given more major roles in fiction in recent years, but conversely, there's still an expectation that women on television are supposed to be at least basically attractive, so sex appeal ends up being the way to go. On the flip side of things, where a male Sexy Mentor is concerned, this is usually in a work whose target audience is largely women.

has some good commentary on this topic, as she couldn't help but notice that she had a similar situation in her novel Rampant.

See also Teacher/Student Romance when the mentor's sexiness contributes to a romance with their mentee, and Mentor Ship when the fans read into this. If the mentor particularly enjoys the power she has over the man, it's Mistress and Servant Boy. May include a Hands-On Approach. Compare Hot Teacher.