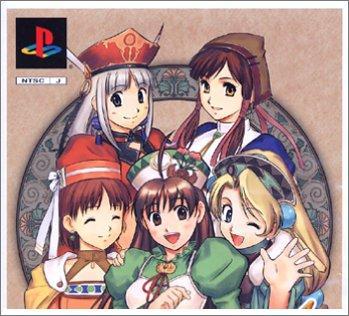 The intrepid heroines of the "classic" Atelier games (that haven't come to North America yet). Clockwise from upper right: Lilie, Marie, Viorate, Elie, and Judie.
At first, anyone is incompetent. An invulnerable brave man, a famous alchemist, a cook to the Royal Household... and so on. But they wish the hope, the desire more than others. And they attained their long-cherised desire. You decide your desire, then there must be come true...
— Message displayed in 20th anniversary video

created for the series, and also shown in the closing credits of Nelke and the Legendary Alchemists: Ateliers of the New World
Advertisement:

The Atelier series is a series of RPGs developed by Gust Corporation of Japan, with some localized by Nippon Ichi. The franchise had been exclusive to Japan (with Atelier Marie, Elie, Lilie, Judie, and Viorate) until the release of the first game in the Iris trilogy in the United States in 2005. The series also possesses a brief manga depicting some Alternate Universe adventures between the first two heroines, brought to America courtesy of Tokyopop.

Based around the concept of the "atelier", or "artist's workshop", the main character in the games is usually an alchemist looking to be the greatest in her/his field. Item Crafting is a major component of every game in the series, as the player is tasked with finding ingredients and recipes to create new items/spells.

The earlier games are rather famous in Japan for being very different from other RPGs of the day, with the item crafting and single-city-interaction focus. These differences, however, kept them out of the Western eye during the 90s and early 2000s, and after a few not-as-great sequels and after the rest of the industry began to judiciously "borrow" certain gameplay elements from it, the series' fortunes fell somewhat. The PSX-era games are still fondly remembered in Japan, however, and were long held up as an example that the Japanese game industry is still capable of innovation - and even today, when very few other games really try to emulate the unique style of the franchise, they're an example of how the Japanese industry is a lot wider and more varied than it is sometimes given credit for.

Main Series:note Until Ayesha, all U.S. releases were handled by NIS America; releases are currently handled by Koei Tecmo

It's worth mentioning that the first two Salburg games, Marie in particular, have been re-released and re-made on more platforms than we can list here. Some of those platforms aren't even available outside Japan. Yeah, this series is more than merely popular there.

The Atelier games and related media provide examples of:

Please only include tropes that occur in multiple games or in games not available in the U.S. in this list. For specific game tropes, refer to the game pages.