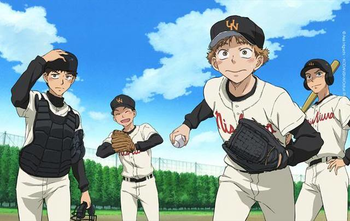 Ōkiku Furikabutte, also known as Big Windup! is a Seinen manga and anime series about High School Baseball by Asa Higuchi, which began serialization in Monthly Afternoon in 2003 and is still on going. It was later adapted to anime by A-1 Pictures; the first season aired for 25 episodes in 2007, followed by a 13-episode second season in 2010.

The series, often shortened as ''Oofuri'', follows freshman Ren Mihashi—who despite being the ace pitcher of his team all through middle school, is a sniveling crybaby with absolutely no confidence. Partly because of his personality and partly because they believed that he was only the ace because of nepotism, he was bullied for all three years of his middle school baseball career, which has left him even more of a neurotic, emotional wreck than before.

When he finally leaves for Nishiura, he finds himself a new team with no seniors that's only switched to hardball that year. Better yet, he meets Abe, an analytical control freak of a catcher who actually appreciates his exceptional command and control. There, he rediscovers his love of the sport as he learns what playing on a team's really like and tries to overcome his emotional baggage.

The baseball games depicted in Oofuri are realistically long, and Mihashi being the type of pitcher that he is, Nishiura relies heavily on strategy to win their games. It's also notable for Asa Higuchi's incredible attention to detail—even the other teams have hefty lists of named characters, with established relationships, height/weight statistics, and consistent positions in both defense and offense.

The manga series won the prestigious Tezuka Osamu Cultural Prize for best creative work in 2006. In 2007, it won the Kodansha Manga Award for general manga.

Now has a character sheet which badly needs more contributions.