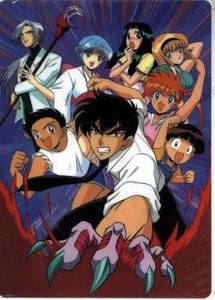 Hell Teacher Nube (Jigoku Sensei Nube) is a supernatural shonen manga written by Sho Makura and illustrated by Takeshi Okano, which ran in Weekly Shonen Jump from 1993 to 1999. An 49-episode anime adaptation aired from 1996 to 1997 on TV Asahi.

Meisuke Nueno (known as "Nube" by everyone who knows him) has been able to see spirits ever since childhood thanks to his Psychic Powers. Cool as this may sound, it has made him a constant target for all kinds of nasty creatures. Not to mention, his mentor and mother figure Minako-sensei perished because of this...

Fortunately, "Hell Teacher" Nube is able to deal with these spirits by way of his magical left hand; unfortunately, this results in him attracting even more supernatural events to center on him... and to his workplace, which happens to be an elementary school. Luckily for him, his students are often more than happy to give him a hand when resolving his cases.

Followed by the sequel Izuna the Spiritual Medium: Ascension (霊媒師いずなASCENSION) in 2011.

In May 2014, the official sequel Hell Teacher Nube Neo (地獄先生ぬ〜べ〜NEO) started publication in Shueisha's Grand Jump anthology book. Set ten years after the previous series, it follows Nube and a grown-up Kyoko Inaba (who has become a teacher in Nube's footsteps) as they protect their brand new cast of students from the demonic horrors that haunt the city. This sequel ended after 4 years in 2018.