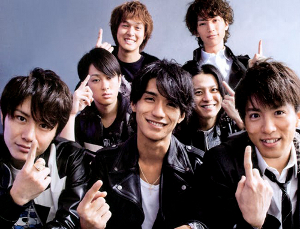 Kanjani 8 is a Japanese boy band that was formed in 2002, and debuted in 2004. They were formed and debuted by Johnnys and Associates, and, as many other groups in the company, have enjoyed success. This, however, took them longer to achieve than the average group, as they were rising from the then struggling Kansai branch.

The group consists of Nishikido Ryo, Yasuda Shota, Ohkura Tadayoshi, Maruyama Ryuhei, Yokoyama You and Murakami Shingo. Uchi Hiroki used to be the group's eighth member, but was kicked out of the group after he was caught drinking underage. Shibutani Subaru left the group and will be leaving Johnnys and Associates to study music abroad.