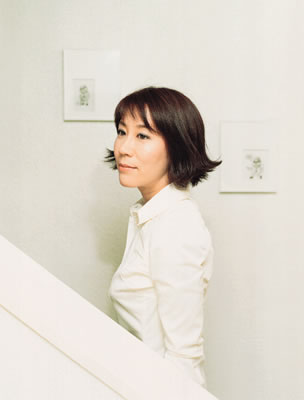 "You have got to hear this shit. It's like she's hitting you over the head with a sock full of Jonny Quest!"
— Alternate John Williams, John and Yoko

Yoko Kanno (born March 18, 1963) is a famous Japanese composer and musician, known primarily for her work on anime soundtracks. Her name being attached to a project has caused many rejoicing moments for many fans.

Born in Sendai, Japan and having begun her career composing video game soundtracks in the late 1980s, she has written or otherwise contributed to the soundtracks of a large number of anime, including (but not limited to:)

Besides soundtrack work for movies, TV, anime, and video games, Kanno has occasionally ventured into pop music; she has released two solo albums, and has served as producer for several albums from other musicians (including writing at least four of Maaya Sakamoto's albums). She sometimes sings under the pseudonym of "Gabriela Robin," which for many years was her Secret Identity. She publicly revealed herself as Robin by singing one of Robin's songs at a venue that Robin was slated to perform at, though she has not otherwise publicly acknowledged the alias.

Kanno can write in any genre known to mankind — and even a few that haven't been invented yet. She is the master of the Genre Mashup. Surprisingly enough, she isn't a One Woman Band, something that would make her even more awesome. She is a keyboardist and frontwoman of The Seatbelts, a jazz fusion band created exclusively for the soundtrack to Cowboy Bebop.

A more in-depth biography can be found here

, and a slightly more in-depth discography can be found here

Not to be confused with Yoko Ono.