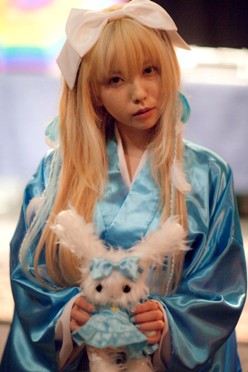 Over the years she has become well known for her ever changing looks. There's arguable description that she is part of the Visual Kei movement, though this is possibly because of her involvement in Lolita.

Born as Kana Uede, (植田佳奈) (26 January 1982) she showed interest in music at an early age, and held her first concert at 16 years old. She is known for her unusual singing style, that seemed to make her voice purposely tone deaf. This usually comes in two styles: One is the nasally kind that she often uses along with her cute garb, and the other being a screechier harsher and deeper kind, usually accompanied by punk / rockish music. Nevertheless, this gained her fans and followers, despite some criticism (usually about her singing, obviously). Her cutesy fashion has, of course, not failed to gain attention, and some fans who go to her concerts cosplay as her. She had more than one trademark look, and there's no telling what she'll look like next.

After seven years of silence, Moon Kana has released a new song, Hoshizukiyo no Hana

Not to be confused with the joshi wrestler Kana.