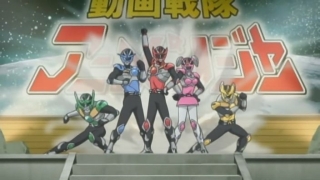 The Squad, Japanese style. The word can be translated as "Task Force" or "Squadron." Usually come in teams, with color-keyed uniforms and a range of personalities/roles that usually follows some variation on the Five-Man Band. Known for their synchronized posing; also, a Standard Power-Up Pose is often used in many Sentai works during the Transformation Sequence. A key concept is that the collective team are more important than the individual, and that more can be achieved by working together.

Although there had been several superhero teams on Japanese television, the granddaddy of the whole "color-coded superhero team" concept is the live-action Super Sentai toku franchise which began in 1975, which is better known to western audiences as the source material for Power Rangers.

A very western form of Sentai is to feature five teenagers receiving powers, with a transformation, i.e. it doesn't have to involve color-coding, or full body suits. They may not even transform at all, but have powers that combine to make a greater whole.

Contrary to popular belief, "Sentai" ONLY denotes shows that have a squad of nigh-identical, color-coded superheroes, not every transforming superhero that comes from Japan (the proper term for that would be Henshin Hero, which is also part of the Tokusatsu genre).

Older Than Cable TV, the first usage of "Sentai" was for task forces in Imperial Japan, though variants existed as far back as feudal times. The JSDF currently doesn't use "Sentai", but does use the related term "Kantai".