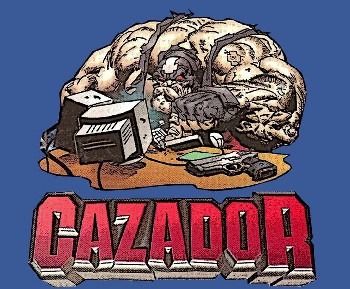 Cazador (initially "El Cazador de Aventuras", then just "Cazador") was an Argentine comic book published in the 1990s and early 2000s, about a bulky, stupid and smelly anti-hero that lives in an abandoned church. Every adventure starts with Cazador minding his own business and then being dragged into some kind of mess involving demons, corrupt politicians, martian invaders, cosmic abominations, etc, and ends up destroying everything, insulting everyone, killing everybody and drinking mate. It is a classic example of The Dark Age of Comic Books, taken to such gory and over the top extremes that it actually became funny. Very funny.

Not to be confused with El Cazador.