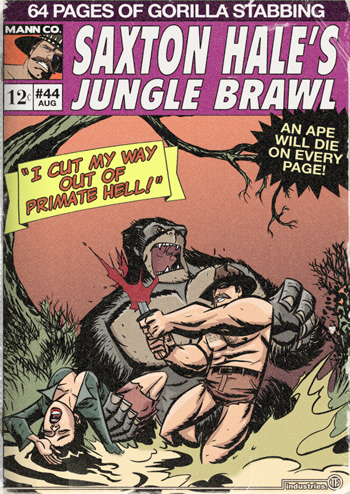 This trope is in play when a work or character is loaded with such absurd/extreme examples of "masculine" stereotypes that you pass into parody. It is, simply, badass made silly.

While the trope Rated M for Manly employs many motifs, it is first and foremost a celebratory trope played straight: Testosterone Poisoning is about works that parody manliness, or play it for laughs, by taking it to the extreme.

Some works which start out as Rated M for Manly can cross over into Testosterone Poisoning territory later; two fairly reliable indicators that it's got a case of Testosterone Poisoning are the presence of the phrase "Are you man enough for...", or something in a similar vein; and a direct statement that the product or work is "not for women".

The Darwin Awards website uses the term to describe people who died attempting to pull off absurdly masculine stunts — the sort of things that would end up on this trope page. It was even used in the title for one death where a man lopped his own head off with a chainsaw in an attempt to "prove" to his friend that he was tougher.

Not to be confused with the actual act of putting oneself in harm's way to prove one's manliness: that one is covered by Macho Masochism (although overlap is common).

The phrase was possibly coined by Alan Alda for a book on feminism, and popularized in 1984 by Dr. Helen Caldicott, a physician strongly opposed to nuclear weapons. In her book Missile Envy, she speculates that the arms race is partly fueled by this.

And then he became the mentor for "Mantastic" Derrick Batemann, who, in Bryan's words, is "manly, so manly, OH SO manly!"

Being the descendents of Kron and inheriting his manly blood, the barbarian tribe that take his name are all absurdly tough.

Being the descendents of Kron and inheriting his manly blood, the barbarian tribe that take his name are all absurdly tough.