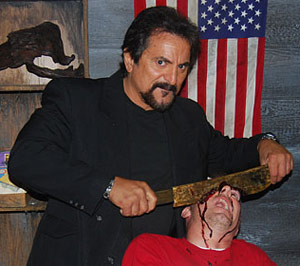 "Film is a truly magical medium. You can create illusions of reality, make people think they've seen things that they really haven't — like blowing a guy's head off with a shotgun."
Advertisement:

Thomas Vincent Savini (born November 3, 1946 in Pittsburgh, Pennsylvania) is a special effects artist and an actor, known for his contributions to the Horror genre and his frequent collaborations with George A. Romero, Robert Rodriguez, and Quentin Tarantino. He rose to prominence for his work in the original Dawn of the Dead (1978) and Slasher Movies like Friday the 13th (parts I and IV) and The Prowler. He also directed the first remake of Night of the Living Dead in 1990.

His acting appearances include:

His video game credits include:

Additionally, him and his makeup effects team help create and design The Fiend. Specifically, his team created the mask that Bray Wyatt wears as The Fiend and Savini help create a custom designed SmackDown Universal Championship belt with its design taking after The Fiend's mask.

The man himself provides examples of: