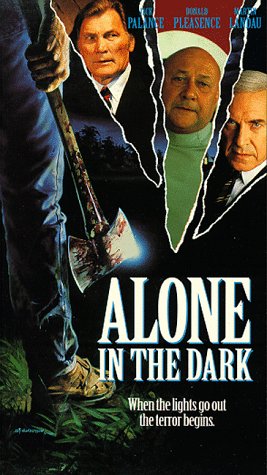 Alone in the Dark is 1982 slasheresque horror movie directed by Jack Sholdernote (who also did A Nightmare on Elm Street Part 2: Freddy's Revenge, The Hidden and Wishmaster 2: Evil Never Dies) and it stars Dwight Schultz, Donald Pleasence, Martin Landau and Jack Palance. It was also the one of the first in-house films released by New Line Cinema.

Dr. Dan Potter has just arrived in the psychiatric haven of Dr. Bain to replace one Dr. Merton, who has moved to other work. Some of the patients, who really liked Dr. Merton, come to conclusion that Potter has killed him and now he is going to kill them.

Yeah, it's a case of primo Insane Troll Logic, but these people are insane.

One night, a blackout caused by a power plant failure lets the vengeful patients escape the haven. During the ensuing citywide looting, they arm themselves and start seeking out our good doctor....

These tropes were found in the dark: