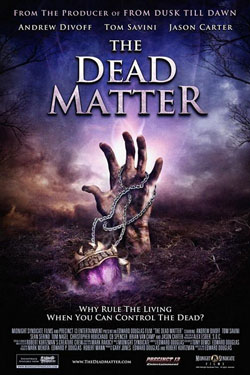 Yes, they do.
Why rule the living, when you can control the dead?
Advertisement:

The Dead Matter is a horror movie originally made by Edward Douglas of Midnight Syndicate in 1995. But at that time, it was filmed with a few friends, one camera, and $2000. Fast forward twelve years, and while Syndicate were writing the soundtrack for Robert Kurtzman's The Rage, Douglas proposed the script for the movie to Kurtzman. Soon, an all new Dead Matter was coming to life.

The movie starts off in Germany, where a horde of zombies flock toward a man holding an ancient Egyptian scarab, which appears to be controlling them. The man (vampire Vellich, played by Andrew Divoff) is stopped when hunter Ian McAllister (Jason Carter) steals the scarab away. After a chase ending with Vellich killing Ian's assistant Mark, the story moves to Gretchen Bennington (Sean Serino), a young woman still in mourning over her brother Sean's death. She leads her friends into the woods to conduct a seance in an attempt to bring Sean back, where she finds the scarab. As they happened not to notice Mark's corpse lying close by, all hell breaks loose when Gretchen finds herself in complete control of any dead matter. Several other important subplots are woven throughout - Vellich's vampiric rival Sebed (Tom Savini) also wants the scarab, and is running an underground drug-dealing business. Gretchen's friend Frank's diet pill business has just launched.

Reminiscent of many old-school zombie and vampire films, the movie's visual effects are the result of being shot completely on film instead of digitally. The soundtrack is, naturally, all by Midnight Syndicate. Even though the movie went straight to DVD, it received incredible reception from horror magazines and websites everywhere.

One important detail - the title, while it is referring to 'matter that is dead', is also a statement - those who are dead matter. And in this movie, they definitely do.

Tropes in The Dead Matter: