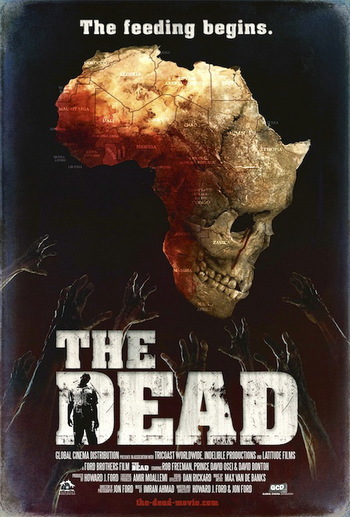 The Dead is a low-budget 2010 British horror film by Indelible Productions.

U.S. Air Force engineer Lt. Brian Murphy (Rob Freeman) is the sole survivor of a plane crash, finding himself washed ashore on the African continent. He's far from home, low on supplies, cut off from all contact with the outside world, in one of the most dangerous places on Earth, and he just wants to get back to America and be with his family. Unfortunately for him, he's also found himself trapped smack in the middle of a Zombie Apocalypse, making the continent all the more dangerous for him.

At the time of its release it was considered just another sub-par zombie movie but the fan reaction was intense making it highly popular and successful.

The film is unique compared to other zombie movies, not so much for what it features but what it doesn't feature. Gore is kept to a minimum, and a slow and agonizing buildup of tension is utilized instead of cheap and cliche jump scares; before the movie is over the audience is practically begging for the random zombie to pop up with an accompanying scare chord.

Not to be confused with the 1987 film of the same name directed by John Huston. A less successful sequel, The Dead 2: India, was released in 2013.

The Dead include examples of: