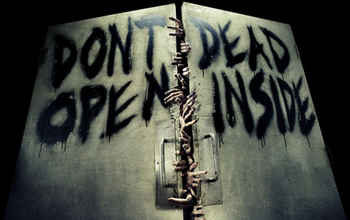 Don't dead open inside? I don't get it.
Advertisement:

Almost every zombie film has a scene where the survivors goes into a house or building because it LOOKS safe. But there's that one room someone overlooked. They open the door and a swarm of zombies start to pour out. Usually this happens when people refuse to properly dispose of infected loved ones and they reanimate hours later. Or some refuse to kill their loved ones out of simple grief and decide to hide them in the basement, attic, closet, etc.