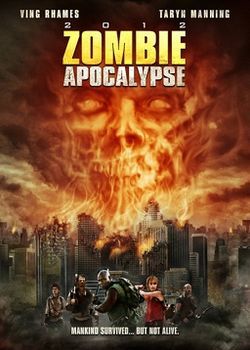 Mankind Survived... But Not Alive.
Zombie Apocalypse is a 2011 horror film made by The Asylum, staring Ving Rhames, about a group of people trying to survive a Zombie Apocalypse, and get to a safe refuge known as Catalina. Along the way, they lose members, gain members, and have to fight off zombies.

Tropes relating to Zombie Apocalypse include: