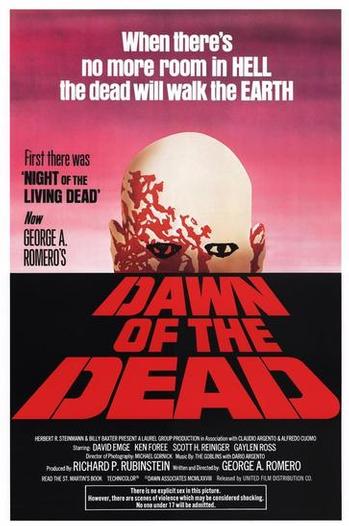 Shop 'til you drop... dead.
"Every dead body that is not exterminated becomes one of them. It gets up and kills! The people it kills get up and kill!"
— Dr. Foster
Advertisement:

Dawn of the Dead is the second movie in the Living Dead Series of Zombie Apocalypse films written and directed by George A. Romero. It was first released in 1978, ten years after the original film in the series, Night of the Living Dead. European audiences might better know this film from when it was distributed as Zombi, which itself would receive an unofficial sequel of sorts in Zombi 2, thereby beginning a headache for horror movie buffs and collectors over film name changes and numbering issues.

Shortly after the start of a Zombie Apocalypse, a news reporter, a helicopter pilot, and two renegade SWAT team members strike out on their own and set up shop in a suburban shopping mall, but they're beset by both a growing horde of zombies and looters.

Officially followed by Day of the Dead, and loosely remade in 2004.

Dawn of the Dead contains examples of the following tropes:

"Where is Flyboy?"
Feedback

"The Gonk" has gone into the geek reference pool, even being clucked by chickens as the ending theme to Robot Chicken.

"The Gonk" has gone into the geek reference pool, even being clucked by chickens as the ending theme to Robot Chicken.