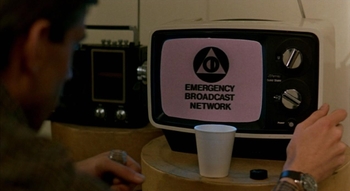 That signal's coming in surprisingly well, considering the world is ending.
Advertisement:

If older style computer or TV screens are recorded on film, the scan lines on the picture tubes can become visible, making a mess of the image that was easy to see by everyone but the camera. This is because the TV's scan rate and camera's frames-per-second are not synchronized, and as a result, a black bar repeatedly rolls up or down the screen.

There are two ways to avoid this. First, there are ways a television screen can be specially synced up with the camera. This is surprisingly difficult with older technology. Indeed, nobody completely figured this out until 1982's Videodrome, although a few productions managed it with black and white monitors.

Second, the images on the TV/computer screen can instead be added as an optical effect in post-production, with the result that now a clear picture appears. This is a less sophisticated effect, so you tend to see it more often only in older productions. Sometimes, the FX-inserted image is suspiciously crisper than everything else around it. Another dead giveaway is the shot suddenly moving to an extreme closeup of the TV screen, with only a dial, button, or paying brand name visible off to one side to even clue the viewer in that they're being shown the same screen that other characters are looking at, and not switching scenes entirely.

Rarely seen on newer shows because of advances in special effects and new monitor technology, but just about any sci-fi series from the 60's or 70's will have at least one example.