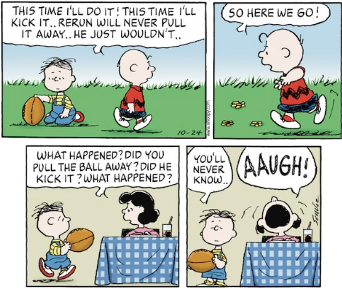 Lucy shares our sentiments.
Reporter: The book ends on an ambiguous note. We don't know—do you think [the young lovers] get back together in six months like they promised each other?
Jesse: I think how you answer that is a good test if you're a romantic or a cynic. You think they get back together; you don't, for sure; and you hope they do, but you're not sure.
— Before Sunset, commenting in-universe on the ending of Before Sunrise
Advertisement:

Sometimes the resolution isn't clear-cut. There's a lot left unexplained and the audience is still asking questions. Usually done so that different people can come to different conclusions.

Compare Gainax Ending, which is just plain confusing, and No Ending, in which there's no resolution, period. If there are two possible outcomes, one reasonable and one magical, it's Maybe Magic, Maybe Mundane. In a horror context, see Nothing Is Scarier. When fans wish this would have happened, but it didn't, then it is a case of Fan-Disliked Explanation. When an armed force is involved, see Bolivian Army Ending.

Contrast Happy Ending and Downer Ending, where the conclusion is obvious, Bittersweet Ending, which is ambiguous about the happiness of the resolution, but not on the events themselves, and Esoteric Happy Ending, which seems happy until the audience actually thinks about it.

An ambiguous ending can lead to Wild Mass Guessing among the fanbase about the specific details. It may even turn the work into a Fanfic Fuel for fans that try to fill the gaps of the ending and provide more clear explanations.

Since this is an Ending Trope, beware of spoilers.

The snow globe ending in Krampus.

The snow globe ending in Krampus.