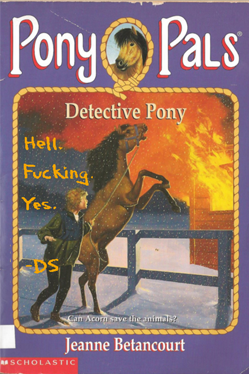 "Once you turn this page, there's no going back. You'll have entered the world of Detective Pony. God help you."
His revision is a tough, emotionally draining read. But it's cathartic, in all the worst ways possible.
—In-universe description

Pony Pals: Dirk Strider Edition is an edited version of the Pony Pals book Detective Pony, by someone under the screen name Sonnetstuck. In Homestuck, Dirk made Jane an edited version of Detective Pony for her 13th birthday, and we get to read the first two pages of it; Sonnetstuck defictionalized that book, taking the entire book and modifying it the same way Dirk did. It follows Anna Harley, Pam Crandal, and the City of Pawnee, Indiana as they find a demonic cat named Minos who they and Anna's godly pony Acorn want to erase from the world. After a long series of events, they meet Jeanne Betancourt and Dirk Strider, and they realize they're fictional characters in a messed-up version of an innocent story that they hope to restore.

The fic project can be found here,

as well as reprinted on Archive of Our Own here.