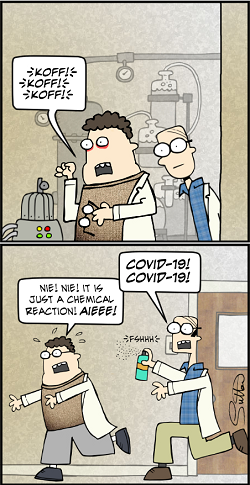 A character sneezes once, says they feel a bit funny, or coughs once—and everyone else thinks that character is sick. The character does not show any illness signs except that one sneeze or cough (which in reality is not a biggie), but nevertheless the other characters put him/her in bed, or they have to miss something fun or important or both. Often at the end of the episode another character "catches" the false illness by sneezing once. And if there is an actual Sick Episode, at the end this trope often ensues in a second character, especially with coughing or sneezing. Perfect Health (where the characters never sneeze, cough etc unless they are sick) is a similar trope but in this one, the character shows no other symptoms over the course of the episode and therefore most likely is not sick.

Compare Logical Fallacies, Perfect Health, OOC Is Serious Business (if that glitch was somehow out of character) and Sneeze of Doom. Contrast Deadly Nosebleed, Incurable Cough of Death (when it seems like this trope but turns out to actually be an illness) and Definitely Just a Cold. Also compare Victorian Novel Disease (except the victims of this often are genuinely sick) and Hypochondria (when someone does one of these on themselves).

Winnie the Pooh and Eeyore assume Owl must be catching a cold solely because of sneezing... and he's not even actually sneezing!

Winnie the Pooh and Eeyore assume Owl must be catching a cold solely because of sneezing... and he's not even actually sneezing!