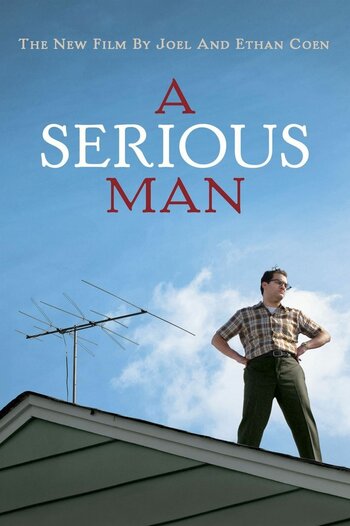 Receive with simplicity everything that happens to you.
— Rashi
Advertisement:

A Serious Man is a 2009 dark comedy-drama film conceived by The Coen Brothers, depicting a few crazy days in the life of a midwestern physics professor, Larry Gopnik (Michael Stuhlbarg).

Larry's wife Judith astounds him by declaring she intends to divorce him in favor of the more distinguished widower Sy Ableman; their son Danny, whose Bar Mitzvah approaches, smokes weed while he pretends to study; and their whiny daughter Sarah sneaks money from Larry's wallet to save up for a nose job. At the college where Larry teaches, his student Clive Park attempts to bribe him for a passing grade — and Mr. Park threatens to sue him for defamation should he report it. He is kicked out of his own house and forced to live in a crummy motel with his sickly and eccentric brother Arthur. Oh, and someone's been writing anonymous letters to his university warning them not to grant Larry tenure. Can things get any worse?