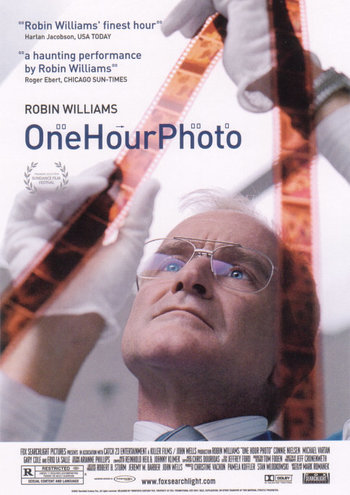 One Hour Photo is a 2002 psychological thriller film directed by Mark Romanek and starring Robin Williams.

Seymour "Sy" Parrish (Williams) works as a technician at a supermarket's one-hour photo developing clinic. He's clean-cut and quite ordinary to the point of boring, but not all is well in Sy's world.

Over the course of many years, he has coped with the loneliness in his life through a slow-building obsession with the Yorkins, a textbook modern American middle-class family — husband Will, wife Nina, and son Jake — who are among his regular customers. Longing for the idyllic life he perceives through their pictures, Sy tries repeatedly to insert himself into the Yorkins' lives.

After stumbling upon a dark secret within the family, Sy tries to take action about it, but his efforts to save the Yorkins' picture-perfect life end up affecting it in ways none of them could ever imagine.

Released to critical and commercial success, this movie gave Williams a much-needed Career Resurrection and, along with Insomnia and Death to Smoochy, helped usher in the so-called "dark period" of the actor's career, where he brought disturbing subtexts of his protagonists to the forefront after spending several years making overly maudlin, Tastes Like Diabetes-infused movies. Despite digital photography making photo developing somewhat obsolete, the movie is still incredibly effective as a psychological thriller.

This movie contains uses of: