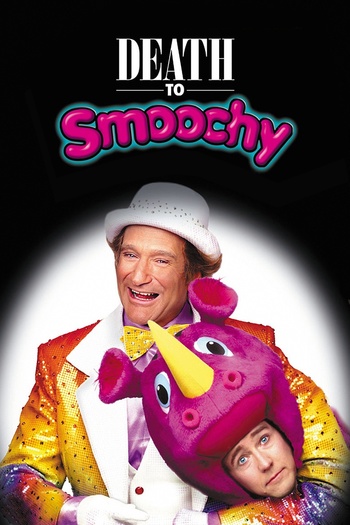 "Today we celebrate outstanding achievement in film with me, the fourth leading man from Death to Smoochy."
— Jon Stewart, hosting the 78th Academy Awards, 2006.
Advertisement:

Death to Smoochy is a 2002 dark comedy film starring Robin Williams, Edward Norton, Catherine Keener and Jon Stewart. It was directed by Danny DeVito, who also plays a supporting role. Death to Smoochy is known for its outwardly vulgar and profane humor, particularly Williams's profound cursing outbursts throughout the film.

Williams plays Rainbow Randolph (aka Randolph Smiley), a children's television show host. Onscreen, he is a lovable and friendly character, but in his personal life, he is virtually the antithesis incarnate of himself: rude and irascible with a propensity for violence. Unfortunately for Randolph, his show is canceled after he is caught by the FBI taking bribes from parents to put their kids on his show, and he is replaced by another show featuring a purple anthropomorphic rhino named Smoochy (a clear parody of Barney the Dinosaur), played by entertainer Sheldon Mopes (Norton).

Randolph spirals into depression and poverty, and vows to bring down Smoochy and his show. Throughout the film, Randolph concocts a variety of sadistic and psychotic plots to ruin Smoochy's career, and becomes involved with a gangster named Merv Green (Harvey Fierstein), but his ploys are constantly foiled by the fact that Smoochy really is as sweet and nice as the character he portrays.