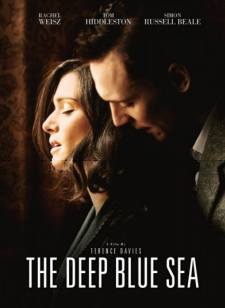 Freddie and Hester
"Beware of passion, Hester, it always leads to something ugly."
Advertisement:

A quiet, brooding stage play by Terence Rattigan from 1952. Rattigan based his story and characters in part on his secret relationship with Kenny Morgan, and the aftermath of the end of their relationship. The Deep Blue Sea focuses on Hester, the middle-aged wife of a British judge. Their marriage is affectionate but lacks passion. Through scenes played out of order, we see Hester fall for Freddie Page, a former RAF pilot who hasn't quite gotten over the war. As her marriage falls apart, Hester finds happiness living with Freddie. But her relationship with Freddie isn't perfect. The play was first performed in London on March 6, 1952, directed by Frith Banbury, and won praise for actress Peggy Ashcroft, who co-starred with Kenneth More.

A feature film version directed by Anatole Litvak was released in 1955, with More reprising the role of Freddie and Vivien Leigh as Hester.

Not to be confused with Deep Blue Sea, unless you're looking for predatory fish.

The 2011 feature film adaptation has the following tropes: