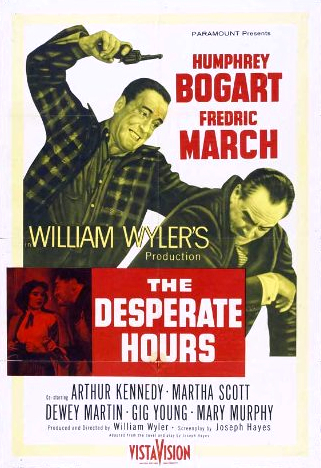 The Desperate Hours is a 1955 Film Noir starring Humphrey Bogart and Fredric March. The movie was produced and directed by William Wyler and based on a novel and play of the same name written by Joseph Hayes (who also co-wrote the screenplay), which were Very Loosely Based on a True Story.

Glenn Griffin (Bogart) is the leader of a trio of escaped convicts who invade a family's suburban home in Indianapolis and hold four members of the family hostage. There they await the arrival of a package from Griffin's girlfriend, that contains funds to aid the three fugitives in their escape. Griffin menaces and torments the Hilliards and threatens to kill them. Finally the father, Daniel Hilliard (March), after convincing law enforcement personnel that their plan to storm the residence is too risky for his family, decides to play a trick on Griffin.

The novel would be adapted again into a 1967 Made-for-TV Movie, while the film was remade in 1990 as Desperate Hours, directed by Michael Cimino and set in Utah. The film was also remade in India as the Hindi film 36 Ghante in 1974.