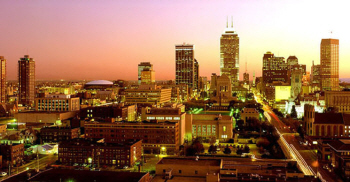 Ah, Indy... the city everyone forgets except for a certain Sunday in May, during which the Indianapolis 500-Mile Race (or Indy 500) occurs. This is virtually the only time it will be mentioned in fiction, despite the fact that it is the fourth-most populous state capital in the US (behind Phoenix, Austin, and Columbus) and the third largest city in the Midwest behind Chicago and Columbus (though other cities in the region have bigger metro areas). And the Indianapolis Motor Speedway isn't technically in Indianapolis, it's in the town of Speedway

, a semi-independent (though wholly surrounded) suburb west of downtownnote In fairness, the town of Speedway was incorporated as a semi-planned, Progressivist "horseless"-roaded community by the eponymous Speedway's main founder, Carl Fisher, only after the latter was built.

Also known as the "Circle City"note the city's center is at Monument Circle, home of the Soldiers' and Sailors' Monument, and the city is encircled by the Interstate 465 beltway, the "Crossroads of America"note from its central location in the US Interstate Highway system; also the motto for the state of Indiana itself, "Naptown"note A play on "Indianapolis" and the city's reputation for being "sleepy", and simply "Indy"note Why say six syllables when you can say two?, Indianapolis was founded in 1826 to serve as the capital of the newly recognized State of Indiana. Indy was an economic powerhouse by the early 20th century, especially in the automotive industry (one of the factors leading local entrepreneur Carl Fisher to create its famous Speedway), but came under the influence of the Ku Klux Klan during The Roaring '20s. Though the Klan effectively took over the whole State of Indiana in the 1924 elections, their power was thoroughly broken by 1931 after their leader was jailed and documents from his files resulted in the resignation of the mayor and most of the city council. Indy spent The '30s as a center of American Isolationism and the city has done its best to forget about these periods ever since.

Urban decay took over in the years after World War II as the economy gradually shifted from manufacturing to warehousing, logistics and pharmaceuticals and downtown Indianapolis has only recently lost the last few decrepit, abandoned factories from its early days as an industrial center. Recently the downtown has undergone something of a renaissance as buildings that formerly housed companies like L.S. Ayres and Madame C.J. Walker's headquarters have been converted into stores, lofts, restaurants and clubs. Two whole blocks of mostly derelict buildings were converted into a large shopping mall and arts districts have grown up in the Broad Ripple and Fountain Square neighborhoods and along Massachusetts Avenue downtown. The Indiana Repertory Theatre is one of the best regional theatres in the Midwestnote the current director of the University of Michigan's drama department, Priscilla Lindsay, spent thirty years as an IRT stalwart, The Indianapolis Symphony Orchestra and Indianapolis Children's Choir have achieved an international reputation, and the Children's Museum of Indianapolis is generally considered the best of its kind in the world. The annual Indiana Black Expo (the first and largest of its kind) draws record crowds, as does GenCon, an enormous gaming convention that annually attracts more than 28,000 participants.

On a more environmentally friendly note, Indianapolis is the most heavily forested city in the world. When taking a picture of the city from the roof of a downtown building almost everything out the horizon is a sea of green. Before the explosive growth of Phoenix in the last part of the 20th century, it was the largest US city without a navigable waterway. The closest thing to a navigable river Indianapolis has is the Broad Ripple canal. That's only 3ft deep and part of it is underground. There's also the White River, but while it's quite pretty and good for things like canoeing and fishing, navigable it ain't.

Once the suburbs get included Indianapolis is larger in terms of land area than practically every other US city. Driving from one end of Indianapolis to the other takes two-three hours, minimum.

In recent years the city has become known in the sports world for something besides auto racing; the Indianapolis Colts (formerly based in Baltimore, a hotbed for horse racing rather than auto racing, though fellow horse racing hotbed Louisville is to the south of Indy on I-65) have become a well known football team after their win in Super Bowl XLI in 2007, and the city hosted Super Bowl XLVI in 2012 to mostly positive reviews. The city is also home to an NBA franchise, the Indiana Pacers, and the 2012 WNBA champion Indiana Fever, in keeping with the state's rich basketball tradition. Minor league baseball (Indianapolis Indians), hockey (Indy Fuel), and soccer (Indy Eleven) teams make their homes here as well, with the Indians playing in Victory Field, consistently called "the best minor league ballpark in America" for its nearly major-league park dimensions, incredible facilities, location in the heart of downtown, and gorgeous, picturesque architecture.

Indianapolis is also a center of amateur athletics, styling itself as the "Amateur Sports Capital of the World" ever since the 1987 Pan American Games. As a result many significant U.S. amateur sports federations (including the National Collegiate Athletic Association and its high school equivalentnote the National Federation of State High School Associations, or NFHS) are headquartered in Indianapolis, and the Big Ten Conference note which originally consisted of ten of the largest universities in the Great Lakes region, though it has since expanded beyond this region and in doing so made the second half of their name inaccurate holds its football championship game here. The city retains all of the facilities necessary to hold an Olympics in miniature and the annual 500 Festival Mini-Marathon, AKA "The Mini", is one of the largest foot races in the U.S with over 35,000 participants and is just one of four full and five half marathons run in Indianapolis every year. Even such peripheral sports as marching band and drum & bugle corps were enticed into relocating to Indianapolis, along with their national associations and associated championships. Indy hosts the Circle City Classic college football invitational every year and with the opening of the new football stadium (which is also designed to become a large basketball arena) the city is guaranteed to host the NCAA "Final Four" Basketball Tournament every four years for the foreseeable future.

Indianapolis' relatively low population density and relatively large geographical area (one-tenth the population of New York City over a much larger area) makes for a very green and leafy city, and rural features like cornfields and horse farms can still be found within city limits. The downtown area along the Canal hosts several museums and is quite attractive to pedestrians, with lovely walkways and paddle-boats for rent. Indy also stays close to its agricultural roots by hosting the annual Indiana State Fair, a huge 21-day agricultural and industrial expedition. Like all Midwestern state fairs the Indiana State Fair is Serious Business, particularly for Future Farmers of America and 4-H, with the largest livestock and produce show of the year along with historical displays and the usual Midway attractions (including the typical selection of delicious fatty fried fair foods). Some of the biggest names in Pop and Country Music have graced the main stage, though the horrific stage collapse in 2011 that killed seven and injured dozens of fans waiting to see country band Sugarland has put a damper on live performances for the immediate future. The State Fairgrounds and the newly expanded Indiana Convention Center are also home to numerous conventions, trade shows and exhibitions, taking advantage of Indy's central location and position at the hub of the interstate highway system.

Indy is also a rail hub, with a significant percentage of the U.S.'s transcontinental train traffic passing through downtown daily on the Norfolk Southern main line, making the sentence "We got stuck behind a train" — i.e. got stuck at a railroad crossing waiting for an extremely long freight train to rumble past — a legitimate excuse for being late to school. Finally, to complete the transportation triumvirate, Indianapolis has a large and modern airport largely given over to extensive air freight facilities, which, combined with Indianapolis' position near the center of both the road and rail networks, has led to the the city becoming the regional freight, logistics, and warehousing center. Though international passenger flights are limited to Canada and Mexico, with major overseas routes departing from nearby O'Hare, Cincinnati, and Detroit, the Indianapolis International Airport is also a regional passenger hub for domestic flights.

Though it lacks a major university of its own, Indianapolis is still a regional center for education and medicine, with a large satellite campus for the two major state universities, Indiana University and Purdue University (IUPUI), located in the heart of downtown; the campus hosts, among others, the IU School of Informatics and a branch campus of the IU Medical School. The city also boasts several smaller private colleges and universities (Butler University and the University of Indianapolis foremost amongst them), pharmaceutical powerhouse Eli Lilly, and several major medical centers — including Methodist Hospital, noted for their ability to put busted racecar drivers back together.

Oh, and if anyone from Indy says "Raceday" without qualifiers they are invariably referring to the day before the Memorial Day holiday (which falls on the last Monday in May) and the Indianapolis 500. Indianapolis Motor Speedway (AKA "The Brickyard") may hold other races, but there is only one Raceday, thanks in part to the annual influx of nearly half a million spectators and the resulting partying, in part because it's the culmination of a month-long festival that kicks off with the aforementioned mini marathon and in part because the race has more than a century of history. Think of it as a Hoosier Mardi Gras — with automotive fuel. Lots of automotive fuel. Though automobile manufacturing has gradually vanished from Indy since the days of Stutz and Duesenberg, auto racing is still a vital part of the local economy, and Indy's famous "Gasoline Alley" is still a name to contend with even though these days the cars — as well as many of the fans — run on alcohol.

The only automobile race that can compare to the spectacle of the Indianapolis 500 is the Monaco Grand Prix, which usually takes place on the same day. Due to time zone differences, it's possible to watch one and attend the other.