Literature / An Abundance of Katherines 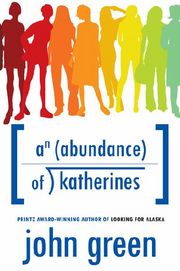 Books are the ultimate Dumpees: put them down and they’ll wait for you forever; pay attention to them and they always love you back.
— Colin
Advertisement:

An Abundance of Katherines is a young adult novel written by John Green. It tells the story of Colin, a recent high school graduate whose girlfriend Katherine has just dumped him. This is made even more traumatic because Colin has dated no fewer than 19 girls named Katherine, all of whom dumped him.

Colin's friend, Hassan, talks him into going on a road trip to take his mind off the pain of losing yet another Katherine. They end up in a small town known as Gutshot, Tennessee, and quickly find themselves at the home of a woman who runs a textile factory which manufactures tampon strings (which is the main source of income for the town). She has a daughter named Lindsey, who is smart and funny and has "a smile that could stop wars and cure cancer," but (1) Colin is definitely not interested and (2) Lindsey already has a boyfriend (named Colin) note Colin is fond of numbered lists in the middle of sentences. Colin and Hassan quickly become friends with Lindsey and start having all sorts of strange adventures.

An Abundance of Katherines was a 2007 Michael L. Printz Award Honor Book. When author John Green received news of this, he proceeded to do his happy dance. This footage can be found on Youtube.