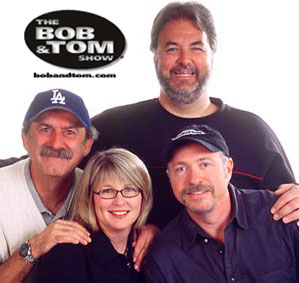 Established in 1983 and going national in 1995, The Bob and Tom Show is a nationally-syndicated Morning Zoo radio show, aired live from the NAPA Studios in the Friggemall Building overlooking beautiful, downtown Indianapolis. Known for its amusing bits and its frequent interviews with up-and-coming comedians, the show serves its intended purpose: To get people out of bed, preferably with a laugh.

The on-air cast of The Bob & Tom Show are as follows:

Aside from the guests, the shows features regular call-in guests (actually played by producers Dean Metcalf, Ron Sexton, Steve Salge, and Marty Bender) who'll make jokes about whatever news story the gang happens to be on. Frequent callers include Floyd the Truck-Driver, Jumbo the Elephant, Kenny Tarmac, and Donnie Baker (who has soared in popularity with his stereotypical white trash persona. I swear to God he has). Original pre-recorded skits chronicle the further adventures of these characters, the on-air gang, impersonated celebrities in the news, and such long-suffering souls as Mr. Obvious (McGee) and his perpetually clueless "long-time listener first-time caller" (Metcalf), in addition to a variety of pop-culture send-ups. A Bob and Tom skit ("How To Prank A Telemarketer", featuring guest Tom Mabe) is the number one most-viewed site of all time on the website YTMND.

The show broadcasts nationally from 6-10 AM on weekdays, and over 2008-10 the best bits were played on television via Superstation WGN at midnight (thanks to the modern miracle of a TV camera in the studio). From 1986-2012, at least one CD compilation of then-recent highlights from the show was released annually as a fundraising drive for Indianapolis charities.