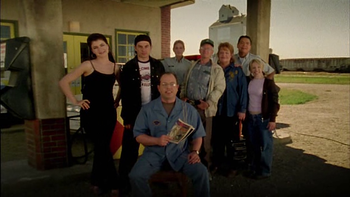 The citizens of Dog River, from left to right: Lacey, Hank, Brent (sitting), Karen, Oscar, Emma, Davis and Wanda
Customer: You know, I've never driven across Saskatchewan before.
Brent: Well, you still haven't really. About halfway to go yet.
Customer: Sure is flat.
Brent: How do you mean?
Customer: You know, flat. Nothin' to see.
Brent: What do you mean, like, topographically? ...Hey, Hank! This guy says Saskatchewan is flat!
Hank: How do you mean?
Brent: Topographically, I guess. Says there's nothin' to see.
Hank: There's lots to see. There's nothin' to block your view.
Brent: [to customer] Lots to see. Nothin' to block your view. Like the mountains back there. [turns around] They're, uh... well, what the hell? I coulda sworn there was a big mountain range back there, juttin' up into the sky all purple and majestic. Must be thinkin' of a postcard I saw or somethin'. Yeah, it is kinda flat. Thanks for pointin' that out.
Customer: You guys always this sarcastic?
Brent: [shrugs] Nothin' else to do.
— Cold Open of the first episode
Advertisement:

A Sitcom set in the Saskatchewan town of Dog River, Corner Gas follows the lives of the town's residents: Brent, the owner of the titular establishment, his parents Oscar and Emma, his assistant Wanda, his friend Hank, restaurant owner Lacey, and local police officers Davis and Karen.

Known for its sly sense of humour, sharp writing, and especially notable for being authentic (actor/writer Brent Butt grew up in small-town Saskatchewan), Corner Gas was eventually brought to a close after its sixth season to allow the show to go out at the top of its game (a move which the cast and crew supported).

Another notable aspect about the series is its wide range of cameos: from two Canadian prime ministers, two premiers of Saskatchewan and one mayor of Regina to Stanley Cup. It seems like Dog River is the most popular place in the country.

The series launched in Canada on CTV and The Comedy Network in 2004. It was picked up for syndication by WGN America in the United States in 2007. It ended in April 2009.

In 2014, a full-length movie was funded using Kickstarter and shown in Canadian theatres for a limited five-day engagement starting on December 3 of the same year, with TV airings and a DVD/Blu-Ray release later that month.

In December 2016, an animated series was revealed

, which began broadcasting on The Comedy Network in April 2018. Most of the original cast and crew have returned, with the exception of Janet Wright (Emma), who passed away in 2016. In the US, all seasons of the original, the movie, and Animated can be streamed for free on Freevee.