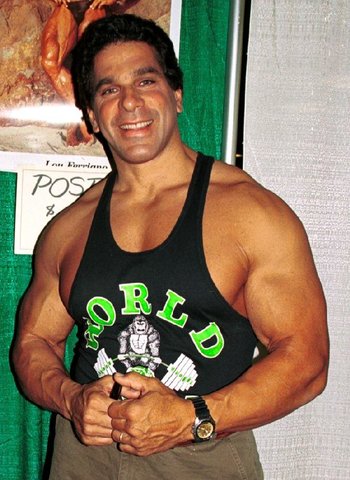 "The truth is, I've been the Hulk my whole life."
Advertisement:

In his bodybuilding days, he won an IFBB Mr. America title and two consecutive IFBB Mr. Universe titles. For a glimpse at his career in that field, there is the documentary Pumpin' Iron, in which Ferrigno figures as one of the main challengers attempting to overthrow the reigning Mr. Olympia Arnold Schwarzenegger.

He is most famous for portraying The Incredible Hulk whenever Dr. Banner (Bill Bixby) got angry and turned green, mean and big in the 1970s eponymous series and its attached TV films.

A lesser known fact is that he reprised the role of Hulk through voice acting in the 2003 film, then in the Marvel Cinematic Universe, when CGI technologies allowed to render the monster more convincingly than green paint on his jacked body. He also had a Remake Cameo in both the 2003 film and the MCU's Incredible Hulk film, both as a security guard.

His stature and musculature also got him cast as Classical Mythology hero Hercules in a couple of B-to-Z grade movies in the 1980s.

Has a famously unique speaking voice, the result of losing most of his hearing before he was 3.

His son, Lou Ferrigno Jr, is also an actor.

Strongest Muscle Is My Heart

A bodyguard mistakes Sarah as his client when she sneaks up behind him, and starts to confess his long standing crush on her, which weirds out Sarah.

Strongest Muscle Is My Heart

A bodyguard mistakes Sarah as his client when she sneaks up behind him, and starts to confess his long standing crush on her, which weirds out Sarah.