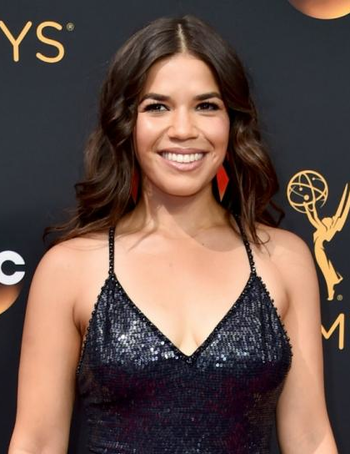 America Georgine Ferrera (born April 18, 1984 in Los Angeles, California) is an American actress of Honduran descent. She has also said she's descended from the Lenca, an indigenous people in Honduras.
Advertisement:

Her first film credit, Real Women Have Curves, was a Cult Classic that was praised for dealing with the Hollywood Pudgy trope, and she starred as Carmen in The Sisterhood of the Traveling Pants (a role she reprised in its sequel). She then gained widespread renown for starring as the titular character on Ugly Betty. Ferrera voiced Astrid in the How to Train Your Dragon franchise and starred in Superstore until its sixth season. She is also the executive producer of Gentefied.

Ferrera is also one of the many part-owners of Angel City FC, a Los Angeles-based team set to start play in the National Women's Soccer League in 2022.

She is married to Ryan Piers Williams, and they have two children together.