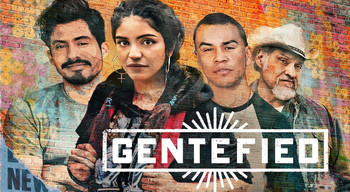 This family's not for sale.
Advertisement:

Gentefied is a Netflix original series created by Marvin Lemus and Linda Yvette Chávez and executive produced by America Ferrera. It is based on the digital web series Gente-fied.

The series takes place in Boyle Heights, Los Angeles, where three Mexican-American cousins - Erik (J.J. Soria), Ana (Karrie Martin), and Chris (Carlos Santos) - try to keep the family's taco shop, Mama Fina's, owned and operated by their beloved immigrant grandfather Casimiro "Pop" Morales (Joaquín Cosío), from going under in their rapidly gentrifying neighbourhood. All three cousins also struggle with their own problems and dreams — Erik must mature rapidly as his ambitious on-off girlfriend Lidia (Annie Gonzalez) is pregnant with their child; Ana tries to make her way in the world as an artist alongside her longtime girlfriend, activist Yessika (Julissa Calderon); while Chris wants to make it as a professional chef, but struggles with not fitting in his family and community. The series boasts an all-Latino cast and explores three generations of a Mexican-American family, their struggles, and Latin American culture in the context of displacement and gentrification.