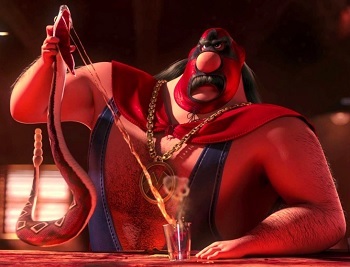 A tendency for overtly masculine, aggressively manly men to hail from and be embraced by Latin America and by Latinos and Hispanics in the USA note Puerto Rico is part of the USA, it, Florida, southern Mississippi and Alabama, and the whole southwestern third of the USA, including all of California, Utah, Arizona, Texas, Nevada, and New Mexico (duh), Oklahoma's panhandle, southern and western Colorado, even the southwestern parts of Kansas and Wyoming, were part of the Spanish Empire (New Spain), and that whole southwestern third was half of Mexico. and Belize note This is the Anglophone country in Central America that borders Guatemala and the one other than the USA that borders Mexico. Belize also was formerly called British Honduras., this regional variant of the Macho Macho Man has a special place in the hearts of Spanish and Portuguese note Brazil is a lusophone, or Portuguese-speaking country, so Brazilians would be non-Hispanic Latinos speakers. It should — they invented the word machismo. Strong, fierce men are culturally revered, from great generals to luchadores. Perhaps not unrelated, per The Other Wiki, the Nahuatl word macho means "one who is worthy of imitation", despite being etymologically unrelated. The roots of Latin macho and machismo run deep.

Can be, but is not always a Latin Lover. Distinct from the generally more reserved and sophisticated Dashing Hispanic, though the two can and do overlap. The macho latino is a common stereotype in Telenovelas.

This trope is, of course, Rated M for Manly, and can result in Testosterone Poisoning if not monitored. Part of National Stereotypes, and found in Latin Land, Spexico, and beyond. Despite the name this could just as easily apply to a macho Filipino note The Philippines, although in Southeastern Asia, has close cultural ties with Mexico, both of which were settled by Spain., a macho Chicano (a native-born citizen of the USA with a Mexican heritage), a macho Puerto Rican, a macho Amerindian or other ethnicity (Hispanic or not, be they white, black, or Asian, not just mestizo) from Mexico or other Latin American country, or a native of mother Spain or Portugal. May sport one of the Magnificent Moustaches of Mexico, but is just as likely to go clean-shaven or wear a neatly-trimmed goatee.