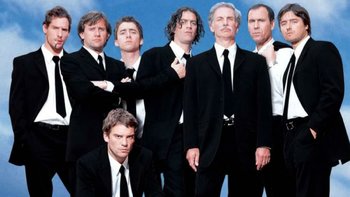 Lookin' back on the track for a little green bag...

Machos was a famous Chilean telenovela emitted in 2003 that was a revelation of the Turn of the Millennium not just in Chile, the telenovela was emmited in diverse countries (not just in South America), various of them redubbed because of the Chilean slangs, and even has a Mexican remake in 2005 (made because strangely Mexico was the only country where the telenovela wasn't emitted).

The story is about the Mercader family, a patriarchy of only men, with seven sons and an illegitimate daughter with the mother of them as the sole woman of the family (that, until The Reveal of the daughter during the telenovela). The patriarch, Angel Mercader, is a machist womanizer who tried to subjugate all his sons during the course of the telenovela, with some of them being loyal to his father and other who opposed him, as well the conflicts between the brothers and their relationship with women.

The telenovela was a sensation in its time because of the treatment of taboo themes, like homosexuality (not taken like a joke as in the past), misogyny, toxic masculinity and infidelity, apart of having a casting starred of men only, something unused and unexpected for the time. And not just for the public, the critics also praised the telenovela and gained diverse prizes in its time, and until today is a Cult Classic in Chile and considered one of the best telenovelas of all time.

Although it uploaded complete in the channel's YouTube account, the telenovela was re-emitted on Canal 13 since January 2021, following a tendence of re-emitting past famous telenovelas due to the lack of new content because of the COVID-19 Pandemic.

Despite of having its own article in Spanish, The Other Wiki made articles in other languages, like in English

Now that the teleserie has been emitted once again and not all public saw it in 2003, various unmarked spoilers can be found here, so read with caution. You Have Been Warned.