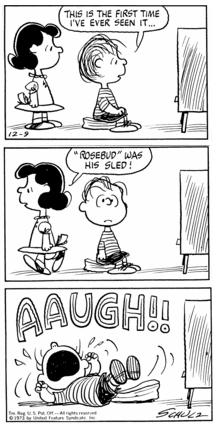 "There, I just saved you two long, boobless hours."
"'Fire!' isn't the worst thing you can yell in a crowded theater. It's 'Bruce Willis is dead.'"
— Lucky, King of the Hill (about The Sixth Sense)
Advertisement:

Information relating to surprises and character entry/exits in an episode were revealed ahead of transmission. The surprise was spoiled.

The most common kinds of spoilers are thus:

Subtypes of the media type of spoiler:

When a spoiler becomes common knowledge in the mainstream — such as Darth Vader turning out to be Luke Skywalker's father — it's no longer spoiler fodder and gets demoted to It Was His Sled. When a sequel to a work spoils its predecessors, it's a Late-Arrival Spoiler. Not to be confused with a spoiler that happens early or late in the work.

But, on one hand, spoilers aren't always a bad thing.

They can create sense of positive Dramatic Irony, for suspense.

On the other hand, posting spoilers on a fan forum will almost always get the forumgoers royally pissed off at you, but when the show's actual owners start using or threatening legal action against people who spoil, you should Spoil at Your Own Risk.

Not to be confused with the DC Comics character Spoiler (though there's a reason she's called that; see below). Or with Double Spoiler ~ Touhou Bunkachou, for that matter. Or with aircraft spoilers

For a few tips on how we treat spoilers around this wiki, see Handling Spoilers.

See Spoilered Rotten for tropes about spoilers, and tropes where spoilers are almost inherent.

Birdie explains, as the narrator, he can not reveal information to the other characters. He then proceeds to sing "Spoiler Alert", bleeping himself from revealing the details of the episode.

Birdie explains, as the narrator, he can not reveal information to the other characters. He then proceeds to sing "Spoiler Alert", bleeping himself from revealing the details of the episode.