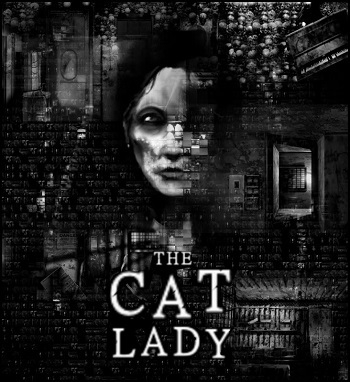 The Cat Lady is a side-scrolling horror Adventure Game developed and released in 2012 by Harvester Games, also known for their 2009 game Downfall (2009).

Susan Ashworth, known in her neighborhood as the crazy Cat Lady, is a lonely 40-year-old who successfully commits suicide. However, upon death she finds herself in the Afterworld, where she is greeted by a strange old woman who calls herself the Queen of Maggots. The old woman grants Susan immortality and sends her back on one condition: Susan must kill five deranged and ruthless "Parasites" who will attempt to hurt Susan -- and others, if they are not stopped. Through the course of the game, Susan must confront herself and her own demons as she fights these Parasites for survival.

The game has been critically lauded, particularly for its story, visual style, and voice talent, especially with regards to how these elements combine to form a compelling depiction of depression. It was also a popular subject of Let's Play runs during its Steam Greenlight campaign. The campaign was successful, and the game is now available for download from Steam

.It eventually became the first game in the Devil Came Through Here thematic trilogy, alongside the Downfall (2009) 2016 remake and 2019's Lorelai.

Not to be confused with the Crazy Cat Lady trope.

Due to the game's very high Story-to-Gameplay Ratio, expect frequent spoiler tags below.

"One day I will get there, I know I will. Even if takes me not nine, but nine hundred lives."