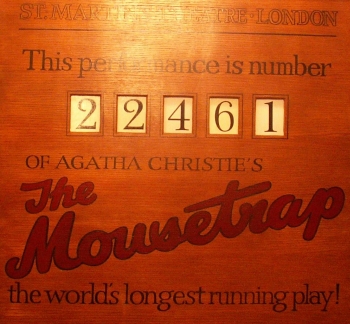 A 1952 play by Agatha Christie adapted from her 1947 radio play, "Three Blind Mice". Since its opening night in London Soho, the play has been running continuously. It holds the world record for longest running show (of any type) of the modern era.

The plot takes place in a guest house called Monkswell Manor, run by a Mr. and Mrs. Ralston. They've only just inherited the house, close to where Mrs. Ralston grew up, and they're excited about the arrival of their very first guests. On their first night running the guest house, however, the Ralstons and their four odd lodgers are snowed in during a blizzard. The radio announces that a serial killer is on the loose — one who uses the children's song "Three Blind Mice" as a Leitmotif. And the more and more time passes, the more and more reason there is to believe that the killer may be inside Monkswell Manor. When one of the guests indeed ends up murdered, suspicion starts falling on anyone and everyone in the manor. Suffice to say, there are a ton of twists which unfold slowly over the entire course of the tale.

And that's all we're going to say. Sorry!

By the way, the murderer is... not gonna be revealed here.