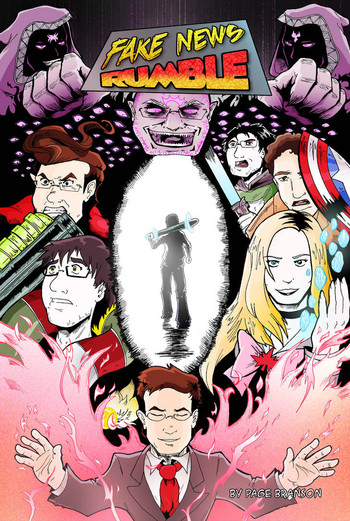 There is hope beyond despair. note Clockwise: Dick Cheney, Yonathan, Eric, Paul, Samantha Bee, Stephen Colbert, John Oliver, Tek Jansen, Stephanos. In the center: Jon Stewart.
"You'd think they'd never seen a gigantic ship erupt from the ground and open a monster-spewing tear in the fabric of space and time before."
— Stephanos, Chapter 1
Jon Stewart: You can ... teleport?! AND you have telekinetic powers?
Advertisement:
Anderson Cooper: Err ... yes?
Jon Stewart: I'm still having trouble wrapping my brain around the whole 'everyone I've ever known has superpowers' thing.
Cooper: Oh please, Jon. It's not as if I've been hiding it!
— Jon Stewart and Anderson Cooper, Chapter 5

An unofficial fan webcomic by Page Branson wherein Stephen Colbert, Jon Stewart, and many other 'fake news' corespondents receive superpowers, receive a magical MacGuffin, or just happened to have had superpowers all along and they've just come in handy today, because today's the day that Dick Cheney reveals himself as an Evil Alien Overlord bent on destroying our planet, stealing Stephen's magical MacGuffin, and drinking the blood of pandas. Our heroes fight their way through monsters, possessed comrades, Evil Twins and mountains of tropes on various Fetch Quests and rescue missions.

The old site is now defunct, but the author e-mails the comic to readers on request

See also: The Colbert Report and The Daily Show.