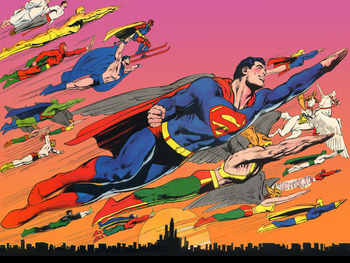 "Up, up, and away!"
Jonathan: Your mother tells me you... can fly?
Clark: Kal-El can fly. Clark Kent is still earthbound.
Jonathan: How did that feel?
Clark: Amazing. And scary. Because if I can do that, maybe I'm capable of anything.
— Smallville, "Crusade"
Advertisement:

Flight has always possessed an inherent appeal for humans.

Millennia of evolution into highly intelligent tool-users and a century of true aviation later and the appeal still remains—the desire to take to the skies unaided is so basic it's an expected theme in nighttime dreaming.

As can be attested, flight can be undervalued as a power especially when it's cheaply tacked on to many heroes, à la a subtrope of this, the Flying Brick. Oddly, floating is usually seen as cooler.

One feature of fictional flight is that the flier is always capable of ignoring aerodynamics and wind resistance, and can carry another humanoid through the air with ease. Of course, it's well-nigh impossible to carry someone in a non-rescue position without making both parties look very

See also Video Game Flight. Compare I Believe I Can Fly, which is the Sub-Trope for settings where this ability is very common. Then there's the Magic Carpet subtrope, where the magic is of flight.

Not to be confused with the comic book Flight, edited by Kazu Kibushi, the novel Flight by Sherman Alexie, the film Flight by Robert Zemeckis, nor the Adobe Flash Flight video game designed by Krin Juangbhanich.