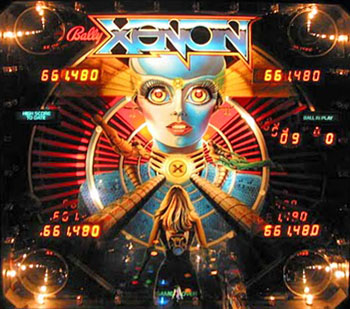 Xenon is an arcade pinball game released by Bally in 1980. It was designed by Greg Kmiec with art by Paul Faris, and electronic musician Suzanne Ciani provided the voice and music.

The game itself centers around Xenon, the supercomputer at the heart of a futuristic society. Build up the Mota Special and the Bonus multiplier, then spell XENON to advance the Super Bonus. When you've collected three X's from the top saucer, shoot through the tube to interface with Xenon and start multiball for faster scoring.

Xenon has the distinction of being Bally's first solid-state pinball game with multiball. And although it was not the first talking pinball ever, Xenon was also Bally's first game with speech, using Ciani's digitized and processed voice instead of the Machine Monotone of earlier games. The attractive science-fiction artwork, appealing sound effects, and uncomplicated rules made it one of Bally's best-selling games of the year. Even today, it is widely regarded as an iconic classic by pinball enthusiasts.

OMNI: The New Frontier did a short documentary on the creation of the game's audio effects; it can be viewed here.

A digital version was available for FarSight Studios' The Pinball Arcade until July 2018, when their license for the Williams and Bally tables expired.