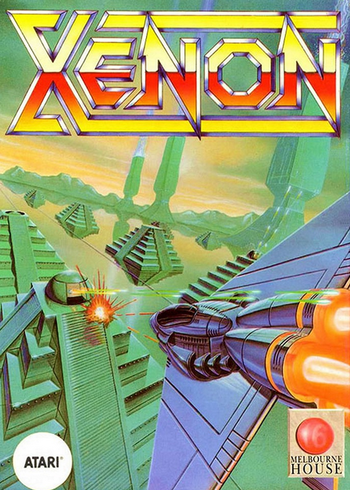 Xenon is a 1988 computer and coin-op game, created by The Bitmap Brothers and published by Melbourne House. Development began on the Atari ST, followed by conversions to several platforms, including the Amiga, MSX, and ZX Spectrum.

The player assumes the role of Darrian, an ace starpilot called into action by a mayday signal. A Federation captain is under attack by the alien Xenites, and Darrian is the only other fighter in the sector. It's up to him to clear a path through the Xenite armada singlehandedly.

The player craft has two modes, a flying plane and a ground tank. It can transform between them at almost any time during play (except when fighting a boss, as well as certain levels where a single mode is forced). The mode chosen depends on the nature of the threat the player faces. Unlike most Vertical Scrolling Shooters, the player can move in any direction instead of only straight up.

Xenon was a bestseller, and even featured as a play-by-phone game on Saturday morning kids' show Get Fresh. However, the sequel Xenon 2 Megablast would go on to eclipse it.