We Will All Fly in the Future 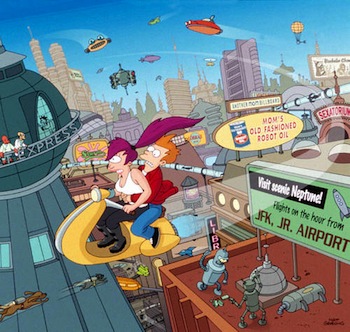 Even the pets get jetpacks.
Advertisement:

One way to establish a setting as occurring in the future is to show everyone — or at least a nontrivial portion of the population — flying about. Whether it is by personal jetpacks, mass transit aircars, or simply letting everyone flit around like birds, the power of flight will be as effortless and casual as walking on the grass. People flying for the shortest and most frivolous reasons will be commonplace, and may even qualify as idle recreation for some.

Might be justified if the characters are in a low- or zero-gravity environment without Artificial Gravity.

Oddly enough, this trope is seldom, if ever, crossed with Big, Fat Future, perhaps because the visual appeal of a flying populace requires future folks who are fully fit.

If a visible means of flight is used, it will often be via Jet Packs, Helicopter Packs, or Flying Cars.

Also see Futuristic Superhighway, I Believe I Can Fly.