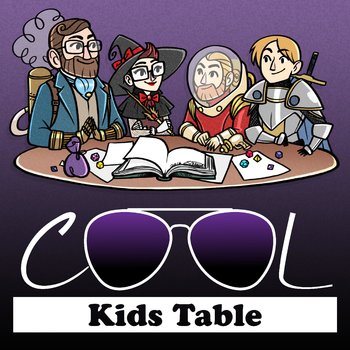 Left to right: Alan, Shannon, Jake, and Josh. Official art by Shannon Manor.
Jake: We didn't actually plan what to say for this, so I hope you're into people flying by the seat of their pants and just incapable of playing game systems correctly.
Josh: And bad puns!
Alan: Wonderful puns.
— Cool Kids Table promo
Advertisement:

Cool Kids Table is an Actual Play podcast from Hey! Jake and Josh and a spin-off of Pokémon World Tour: United. After having so much fun playing a Pokemon tabletop game with their friends Shannon and Alan, the four created an actual-play anthology podcast so they could experiment with other game systems. Anything is on the table, and the rules of the various games are guidelines at best. Systems will be broken if it means the players can have more fun. Most games feature Alan as GM and the other three as players, but there are some instances of others taking the reigns, and some games feature special guests alongside the main cast.

, and they also track the hashtag "CKTCast

". New episodes are generally released every other Sunday.

"This has been the Cool Kids Table, and you can sit with us!"