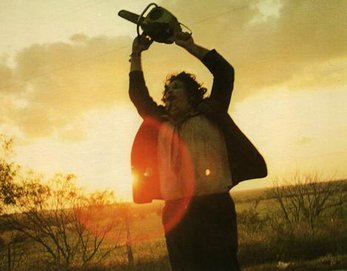 The Texas Chainsaw Massacre is a series of horror films which depict people meeting their ends at the hands of an Ax-Crazy family in Texas, with the chainsaw-toting man known as Leatherface being the prominent deathdealer.

There are also a lot of spin-off media, including:

As well as a few game crossovers:

The chainsaw as a murder weapon was iconic enough to become part of the Hockey Mask and Chainsaw trope in the popular culture.

The rest of the franchise provides examples of: