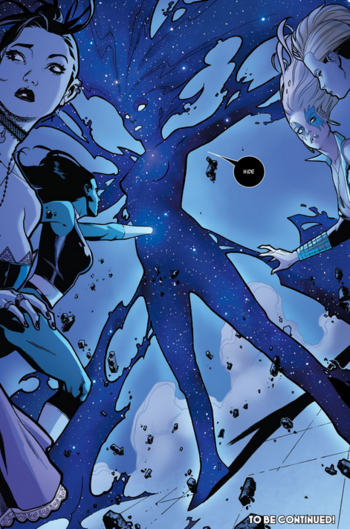 See the constellation ride across the sky!
No cigar, no lady on his arm, just a guy made of dots and lines!
— They Might Be Giants, "See the Constellation"
Advertisement:

When something or someone is literally made of stars. Perhaps it's part of their nature, perhaps they've acquired it somehow, but one way or the other they have cosmological bodies within themselves. They range from having a "mere" planet to all of existence within themselves.

The manner in which this trope manifests can vary. Some cases will simply have twinkling stars or nebulas overlaying otherwise normal body parts, while more extreme cases will seem to somehow be made of, or to be living windows into, the cosmos. Stars are the most common celestial object to feature and the likeliest to appear by itself and in the more sedate cases. More spectacular examples may also display nebulas, comets, planets, galaxies, and other dramatic celestial objects and phenomena. The background color will generally be black or deep blue, but more unusual shades such as purple may also manifest.

The owner of the Celestial Body itself can come in many forms, from a seemingly average looking guy, to a marble, to an impossible thing that considers us to be insignificant insects at best. No matter the form, they may also invoke Bigger on the Inside.

Such characters will generally have some connection to the night or the cosmos. The most extreme ones tend to be Reality Warpers/Reality Warping objects of cosmic scale. Regardless of power, they may also have a Stellar Name.

Commonly overlaps with Unmoving Plaid. See Star-Spangled Spandex for what someone with a Celestial Body usually seems to wear.

Not to be confused with angels or gods, whose celestial bodies (if they even have bodies) need not be a Celestial Body, nor should it be confused with a term for naturally occurring objects in space. Or Uma Thurman.

Lateef is a dragon who's wings and hair resembles a starry night. Considering he's a dragon from Dream Weavers, this is to be expected.

Lateef is a dragon who's wings and hair resembles a starry night. Considering he's a dragon from Dream Weavers, this is to be expected.