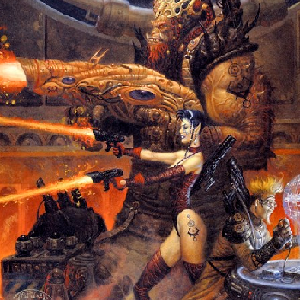 Take your adventure to the stars!
"There's more of just about just anything you could want adrift in this sea of stars: wealth, fame, power, glory, fraternity, or whatever else you dream about when you go to bed at night. True, there's also more violence, hatred, bitterness, despair, and danger than your little world could ever contain.
But with nothing to fight for, what place is there for heroes?"
—John Caspian, Imperial Legions
Advertisement:

Dragonstar is a d20 System setting published in 2001 by Fantasy Flight Games, with a Science Fantasy theme. In the Serpent's Eye galaxy the Dragon Empire, an interstellar superpower prevailing through a combination of cutting-edge technology and magic, has reigned in relative peace for over five thousand years, constantly incorporating new worlds from the uncivilized Outlands at the Empire's edges. These worlds are your ordinary Dungeons & Dragons settings... until the Imperials decide to make contact with them. Many who were completely unaware of anything but their tribes and kingdoms are conscripted into the Imperial Legions and given high-tech armor and energy weapons.

For five millennia the good-aligned metallic dragons have ruled the Empire, but the Imperial Charter signed by all ten draconic houses after the great Dragon War means the time of the chromatic dragons is now upon the galaxy. 40 years ago the sadistic red dragon Mezzenbone took the throne, and many citizens fear what he has planned for them...