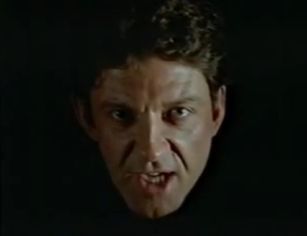 "Feeling brave tonight?"
Dragon Strike was an Adventure Board Game published in 1993 by TSR, Inc. to serve as an introduction for players new to Role Playing Games. The game featured a large number of pre-made adventures, simplified rules, pre-made characters and other features to help new players get accustomed to the genre. One of the most notable mechanics of the game was that it used cards to randomize traps and loot meaning that even when replaying old adventures the traps and treasure would always change. Despite how simplified the game was, it was actually rather fun to play.
Advertisement:

That being said, that is not what this game is known for.

The game also included a VHS containing a thirty-minute So Bad, It's Good short film made to be a visual representation on how to play the game. The plot of the video is about a group of unseen players sitting down to play DragonStrike with an overly-enthusiastic (and Hammy) DM who is represented by a floating head in the darkness. In the game, the players are a group of adventurers who are sent on a quest to stop an evil wizard who has put a curse of eternal night onto the land. Ironically, the VHS is actually better known than the game that it came with, especially after being the basis for an early episode of The Spoony Experiment. You can watch the movie on YouTube here

. A sequel to the storyline, the book Forest of Darkness, was released as part of a revival of the Endless Quest series, and the characters from the tutorial vid showed up in a few other books in the new series besides.

A sequel based on Spelljammer was partially developed and the video for it shot, but was never released, though it was at least used as the basis for the Gamebook A Wild Ride. You can see the trailer for the sequel here

The Game Itself Contains Examples Of:

The Movie On The Accompanying VHS Contains Examples Of: