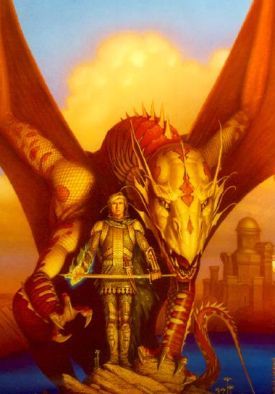 Sequel to the Dragon Prince trilogy by Melanie Rawn, the Dragon Star trilogy deals with the Vellanti invasion of the continent, and Pol coming into his own amid the war and devastation.
Advertisement:

Stronghold details the invasion of the continent by strange warriors.

The Dragon Token deals with the machinations of various nobles on the continent as they attempt to stay alive and gain power over each other in the middle of the war.

Skybowl is the final installment of the trilogy, bringing us to the grand final battle.